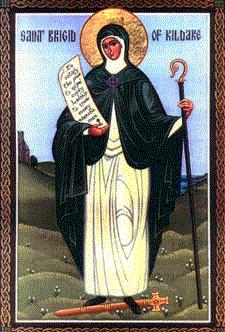 După tradiție, Brighita s-a născut la Faughart lângă Dundalk, County Louth, în Ireland. According to her biographers her parents were Dubhthach, a pagan chieftain of Leinster, and Brocca, a Christian Pictish slave who had been baptized by St. Patrick. Some accounts of her life suggested that Brigid's mother was in fact Portuguese, kidnapped by Irish pirates and brought to Ireland to work as a slave in much the same way as Patrick. Brigid was given the same name as one of the most powerful goddesses of the pagan religion which her father Dubhthach practiced; Brigid was the goddess of fire, whose manifestations were song, craftsmanship, and poetry, which the Irish considered the flame of knowledge.

Whether she was raised a Christian or converted in 468, as some accounts say, is unknown, but she was inspired by the preaching of Saint Patrick from an early age. Despite her father's opposition she was determined to enter religious life. Numerous stories testify to her piety. She had a generous heart and could never refuse the poor who came to her father's door. Her charity angered her father: he thought she was being overly generous to the poor and needy when she dispensed his milk, butter, and flour to all and sundry. When she finally gave away his jewel-encrusted sword to a leper, Dubhthach realized that perhaps her disposition was best suited to the life of a nun. Brigid finally got her wish and she was sent to a convent.

Brigid received the veil from St. Mael of Ardagh and professed vows dedicating her life to Christ. She is believed to have founded a convent in Clara, her first: other foundations followed. But it was to be in Kildare that her major foundation would emerge. Around 470 she founded a double monastery, for nuns and monks, on the plains of Kildare or Cill-Dara, "the church of the oak," her cell being made under a large oak tree. As abbess of this foundation she wielded considerable power, but proved to be a wise and prudent superior.

Brigid was famous for her common-sense and most of all for her holiness: in her lifetime she was regarded as a saint. The Abbey of Kildare became one of the most prestigious monasteries in Ireland, famed throughout Christian Europe. In the scriptorium of the monastery, for example, the lost illuminated manuscript the Book of Kildare may have been created—if it was not the existing Book of Kells, as many suppose.

She died at Kildare around 525 and was buried in a tomb before the high altar of her abbey church. After some time her remains were exhumed and translated to Downpatrick to rest with the two other patron saints of Ireland, St. Patrick of Ireland and St. Columba of Iona. Her skull was extracted and brought to Lisbon, Portugal, by two Irish noblemen, where it remains. There is widespread devotion to her in Ireland where she is known as the "Mary of the Gael" and the veneration of St. Brigid was brought to Europe by Irish missionaries, such as Foillan, in the centuries after her death. In Belgium there is a chapel (7th-10th century) dedicated to Sainte-Brigide at Fosses-la-Ville.

Similar to the association between St. Patrick and the shamrock, a cross made of rushes was linked with Brigid. Legend has it she made the cross from rushes she found on the ground beside a dying man in order to convert him. It is interesting that this legend does not appear in any of the oldest sources and to this day its origin remains lost in the oral tradition. It remains the custom in many houses in Ireland to have a St. Brigid's Cross in honor of the saint. The cross takes many forms and is technically classed by folk crafts experts as a "plaited"; however, the technologies utilized can extend beyond plaiting to weaving and other forms. According to tradition a new cross is made each feast day of St. Brigid (February 1), and the old one is burned to keep fire from the house, yet customs vary by locality and family. Many homes have multiple crosses preserved in the ceiling, the oldest blackened by many years of hearth fires. Some believe that keeping a cross in the ceiling or roof is a good way to preserve the home from fire which was always a major threat in houses with thatch and wood roofs.

O holy Brigid, you became sublime through your humility,
and flew on the wings of your longing for God.
When you arrived in the eternal City and appeared before your Divine Spouse,
wearing the crown of virginity,
you kept your promise
to remember those who have recourse to you.
You shower grace upon the world, and multiply miracles.
Intercede with Christ our God that He may save our souls.

The holy virgin Brigid full of divine wisdom,
went with joy along the way of evangelical childhood,
and with the grace of God/ attained in this way the summit of virtue.
She now bestows blessings upon those who come to her with faith.
O holy Virgin, intercede with Christ our God
that He may have mercy on our souls.

Having learned of things divine by the words of Patrick,
thou hast proclaimed in the West the good tidings of Christ.
Wherefore, we venerate thee, O Brigid,
and entreat thee to intercede with God that our souls be saved.

At the Church of the Oak, thou didst establish thy sacred monasteries
for those that took up the Tree of life,
even the Precious Cross, upon their shoulders.
And by thy grace-filled life and love of learning,
thou didst bear fruit a hundredfold and didst thereby nourish the faithful.
O righteous Mother Brigid, intercede with Christ, the True Vine, that He save our souls.

Differing biographies written by different authors, give conflicting accounts of her life, however three of those biographies agreed that she had a slave mother in the court of her father, Dubhthach, a king of Leinster. Perhaps the most ancient account of her life is by St. Broccan Cloen:

(Saint Brigid was not given to sleep,
Nor was she intermittent about God's love;
Not merely that she did not buy, she did not seek for
The wealth of this world below, the holy one.)

One, the "Life of Brigid" dates from the closing years of the eighth century, and is held in the Dominican friary at Eichstat in Bavaria. It expounds the metrical life of St. Brigid, and versified it in Latin.

Brigid's small oratory at Cill-Dara (Kildare) became a center of religion and learning, and developed into a cathedral city. She founded two monastic institutions, one for men, and the other for women, and appointed St. Conleth as spiritual pastor of them. It has been frequently stated that she gave canonical jurisdiction to St. Conleth, Bishop of Kildare, but, as the Catholic Archbishop Healy points out in Ireland's Ancient Schools and Scholars, she simply "selected the person to whom the Church gave this jurisdiction," and her biographer tells us distinctly that she chose St. Conleth "to govern the church along with herself." Thus, for centuries, Kildare was ruled by a double line of abbot-bishops and of abbesses, the Abbess of Kildare being regarded as superioress general of the convents in Ireland.

Brigid also founded a school of art, including metal work and illumination, over which Conleth presided. The Kildare scriptorium produced the Book of Kildare, which elicited high praise from Giraldus Cambrensis, but which has disappeared since the Reformation. According to Giraldus, nothing that he had ever seen was at all comparable to the book, every page of which was gorgeously illuminated, and he concludes by saying that the interlaced work and the harmony of the colors left the impression that "all this is the work of angelic, and not human skill."

Brigid is at times known as "the Patroness of Ireland" and "Queen of the South: the Mary of the Gael" by a writer in the "Leabhar Breac." Brigid died leaving a cathedral city and school that became famous all over Europe. In her honor St. Ultan of Ardbraccan wrote a hymn commencing:

(In our island of Hibernia Christ was made known to man by the very great miracles which he performed through the happy virgin of celestial life, famous for her merits through the whole world.)

The sixth life of the saint is attributed to Coelan, an Irish monk of the eighth century, and it derives a peculiar importance from the fact that it is prefaced by St. Donatus, also an Irish monk, who became Bishop of Fiesole in 824. Donatus refers to previous lives by Ultan and Aileran. When dying, Brigid was attended by St. Ninnidh of Inismacsaint, who was afterwards known as "Ninnidh of the Clean Hand" because he had his right hand encased with a metal covering to prevent it ever being defiled, after being the medium of administering the last rites to "Ireland's Patroness."

Brigid was interred at the right of the high altar of Kildare Cathedral, and a costly tomb was erected over her. Over the years her shrine became an object of veneration for pilgrims, especially on her feast day, February 1. About the year 878, owing to the Scandinavian raids, Brigid's relics were taken to Downpatrick, where they were interred in the tomb of Patrick and Columba. The relics of the three saints were discovered in 1185, and on June 9 of the following year were reinterred in Downpatrick Cathedral.

In Ireland today, after 1500 years, "Mary of the Gael" remains a popular saint, and Brigid remains a common female Christian name. Moreover, hundreds of place-names in her honor are to be found all over both Scotland and Ireland, e.g. East Kilbride, Kilbride, Brideswell, Tubberbride, Templebride, etc. Places named Brideswell and Tupperbride commemorate in their names the presence of a sacred well ("Tobar" in Gaelic) dedicated to Brigid. Brigid's hand is preserved at Lumiar near Lisbon, Portugal, since 1587, and another relic is at St. Martin's Cologne.