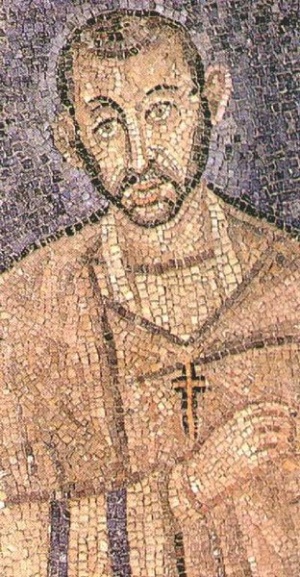 Saint Ambrose, mosaic in church St. Ambrogio, Milan
Our father among the saints Ambrose of Milan came to be bishop of Milan as the only competent candidate to succeed Auxentius, a bishop of Arian persuasion, in 374. A catechumen and trained as a lawyer, he learned his theology through intense study of subject as he was successively baptized and then consecrated as Bishop of Milan. He held to the Nicene belief and through the eloquence of his arguments he persuaded Emperor Gratian to the Nicene confession. Later, he persuaded Gratian to convene a local council, in 381, at Aquileia that deposed the Arian bishops Palladius and Secundianus from their episcopal offices and thus strengthened the Orthodox position in the West. Ambrose zealously combatted imperial court attempts at favoritism to the parties of Arians, the "old" religion, and the Jews, particularly opposing the favors from Emperor Valentinian who supported the Arians. In defending the Orthodox position he has often been compared to St. Hilary of Poitiers. He was known for his sermons which greatly influenced the conversion of Augustine of Hippo. His feast day is celebrated on December 7.