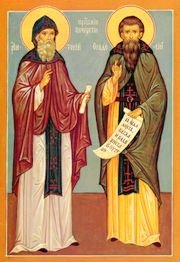 The Venerable Teodosie was born in 1009. He grew up with his parents in Vasilkov and Kursk. His father was a judge. Teodosie was a pious and righteous youth, attending church everyday and reading the Scriptures attentively. His life was overtaken by love for God. He pursued a simple life and found pleasure working with the peasants, which was not consistent with the life his mother thought he should live. With the death of his father when he was thirteen Teodosie began to consider the Lord's words: He that loveth father and mother more than me is not worthy of me; and he that loveth son or daughter more than me is not worthy of me. (Matt. 10:37). With the Lord's words in his mind he decided to leave his mother and to journey to Kiev to join the Venerable Antonie about whom he had heard.

Upon meeting the young Teodosie, Antonie noted the austere life that he led and that his cave was small and uncomfortable. Teodosie replied that the Lord himself had led him to Antonie and that he, Teodosie, would obey him in everything. Foreseeing his future greatness, Antonie accepted him and bade the hieromonk Nikon to tonsure him. He was twenty-three years old.

As the cave monastery grew, Antonie, in his desire to keep an austere life, moved to a new cave he had dug himself on a nearby hill, which became known as the Near Caves. He named Barlaam of Kiev as the new abbot. Teodosie remained with Barlaam at the Far Caves monastery. After Barlaam left the cave monastery for the Dmitriev monastery, Teodosie was elected father superior by his brother monks. In this position he watched over the lives of the monks, and, as a true leader, he set the example by sharing in the ordinary work of the community: carrying water, cutting wood, baking, and so on. He established near the monastery a shelter for the destitute and handicapped that was maintained by the monks using a tenth of the monastery’s income.

With the growth of their community, Teodosie recognized the need for establishing rules for their community life. In establishing these rules he looked to the community life of the Studion monastery in Constantinople and used the Studion rules as the basis for governing the community life in the caves monastery. With emphasis on the duty of charity and common good, the rules served to revive the ideal of strict cenobitism and gave Russian monasticism its characteristic warmth.

Teodosie maintained his independence from the many quarrels of the princes and did not fear displeasure if he felt called as a spiritual father to admonish them. Even in the case of Prince Sviatoslav, whom he admonished for usurping the throne of his brother, Iziaslav, Teodosie was able to maintain peaceful relations. Sviatoslav even gave the land for building a new church of stone.

Neither Sf. Teodosie nor Sf. Antonie were to see the completion of this church. The Venerable Antonie reposed in 1073, followed by the Venerable Teodosie on 3 mai 1074. Before his passing Teodosie blessed his disciple Stefan to replace him as abbot.

Initially, laid to rest in the cave, when in 1092 the monastery brethren transferred his moaşte to the new cathedral biserică, the abbot accompanied by the monk Nestor, chronicler of the Primary Chronicle, discovered his relics to be incorrupt. In a solemn procession the relics were transferred to the Dormition Cathedral on 14 august 1092. In 1106, the Venerable Teodosie was glorified and added the list of canonized sfânti.

The introduction of the Studion rule in the Kiev Cave monastery has been considered to be Sf. Teodosie's greatest achievement. This rule would later spread to all Rus. He is considered today to be one of the first organizers of monasticism in the Biserica Ortodoxă Rusă.