Icon of St. Patapios the Righteous of Thebes (taken from Analogion) 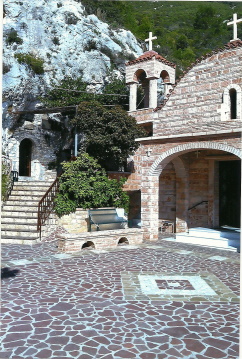 Saint Patapius was born in 380 in the Egyptian city of Thebes. His father was a governor of the region and a descendant of a well known Egyptian family. He and his wife were devout Christians and instructed Patapios in Scripture. As Patapius reached a mature age, well-known tutors were brought from Alexandria to instruct him in science, mathematics, philosophy and rhetoric. Through this education, he became accutely aware of how transient this world is and was attracted to the ascetical way of life. He was particularly inspired by Clement, Origen and Athanasius. His father also took him to the renowned catechetical school in Alexandria where Patapios came under the influence of a blind teacher named Didemus [1]. Didemus inspired him even further to desire the ascetical path he had chosen. When he finished his studies, he returned to Thebes to find out that his father had passed away. Desiring to live a life like the ascetics, he decided to leave for the Egyptian desert where he became well known for his ascetic deeds.

No longer able to find peace in the desert he set off for Constantinople in 428. During his voyage, he met his disciple Sechnuti, who was an Egyptian rower. [During this voyage, their ship passed near Corinth where they stayed for seven years]

By 435, after seven years in Corinth, Patapios left his skete in the Geranian mountaints to resume his journey to Constantinople taking with him the monk Sechnuti. In Constantinople, they secretly went to the Monastery of Blachernae, where he obtained a cell in the city wall. patapios kept his identity a secret and resumed a life of strict fasting, vigil and prayer under the guise of a simple monk.

Here he performed many miracles of healing. After a life adorned with virtue and miracles, he died at a great age of eighty-three (83) in 463 and was buried by his disciples in the church of St. John the Baptist in Constaninople of Petras (of Stone) which was under the protection of the royal family of Constantinople, Palaiologoi, and especially of Saint Hipomoni (Saint Patience) who was the mother of the last emperor of Byzantium, Constantine Palaiologos.

Since the saint's repose, the Church has carefully preserved the stories of his life and his sacred relics. One thousand years after the repose of the saint, when the Turks captured Constantinople, his relics where removed and taken to the little cave-skete in Corinth (as he had requested during his lifetime). The saint's body was hidden behind a western wall in the cave facing the iconostasis and chapel they built.

In the early 20th-century a local priest[2] discovered the relics of the saints hidden in the wall. He was an unnaturally tall priest who regularly served this small chapel and because of his height commissioned some changes to the chapel. The night before the works to the western wall were to commence, Fr. Constantine had a dream in which a monk warned him to "take care when you break the wall because I am on the other side. I am Saint Patapius of Egypt." He was found the next day holding a large wooden cross on his chest, a parchment scroll with his identity and large leaves covering his relics as fresh as they had been picked that very moment.

Since his relics have been discovered, many people have been visited by the saint in visions and dreams asking them to visit "his house in Loutraki". He is especially known for healing cancer and miracles occur world-wide throughout the world, including Australia and America.

His relics was brought to the Geraneia mountains, in the Gulf of Corinth, by ascetics from Constantinople and sealed in a cave. In 1904, the relics were discovered when the cave was opened. The saint's body had been placed beneath tiles and large leaves, to protect it from the damp, and it exuded a sweet odour. On the relic was a scroll giving Patapios's name, with a wooden cross and some Byzantine coins. However some visitors of the cave took pieces of the Saints’ relic for an amulet! But in many of them the Saint came on their dreams and asked them to return his pieces to the nunnery. So they did.

Then a priest from Loutraki, father Konstantinos Sousanis, took the relic of Saint Patapios from the cave and kept it, with the church’s permission, to his house in Loutraki, in order to keep it away from the vandals. Later, on 1952, Father Nectarios, a priest from Soinikismos of Corinth, at the place of the cave in which Saint Patapios was found established a monastery and the relic returned to the cave.

Saint Patapios’ memory is celebrated on 8 December (main celebration) and also at the Tuesday 2 days after the Sunday of Easter (in memory of the day that his relic was discovered). The Saint has done many meracles and helped many people with diseases, family and personal problems. The monastery of Saint Patapios is at Loutraki, a spa city, one hour from Athens, the capital of Greece. The holy relic is now in a special wooden structure at the back of the cave.

The image of God was truly preserved in you, O Father,
for you took up the Cross and followed Christ.
By so doing you taught us to disregard the flesh for it passes away
but to care instead for the soul, since it is immortal.
Therefore your spirit, venerable Patápius, rejoices with the angels.

Your temple is found to be a source of healing,
and the people flock to it eagerly, O saint.
They seek the healing of their diseases and the forgiveness of their sins,
for you are a protector for all those in need, venerable Patápius.