The Acta Pauli probably testify to the existence of a Christian community at Myra in the 2nd century.[1] Lequien opens his list of the bishops of this city with St. Nicander, martyred under Domitian in 95, who, according to the Greek Menologion, was ordained bishop by Saint Titus. In 325, Lycia again became a Roman province distinct from that of Pamphylia, with Myra as its capital. Ecclesiastically, it thus became the metropolitan see of the province. The bishop of Myra at that time was Saint Nicholas. The 6th-century Index of Theodorus Lector is the first document that lists him among the fathers of the First Council of Nicaea in 325.[2] Many other bishops of Myra are named in extant documents, including Petrus, the author of theological works in defence of the Council of Chalcedon quoted by Saint Sophronius of Jerusalem and by Photius (Bibliotheca, Codex 23). Theodorus and Nicolaus were both at the Second Council of Nicaea in 787, the former recanting his previous iconoclast position, the latter being the Catholic bishop whom the iconoclasts had expelled. The Notitia Episcopatuum of Pseudo-Epiphanius, composed in about 640 under the Byzantine Emperor Heraclius, reports that Myra at that time had 36 suffragan sees. The early 10th-century Notitia attributed to Emperor Leo VI the Wise lists only 33.[3][4][5]

After a siege in 809, Myra fell to Abbasid troops under Caliph Harun al-Rashid. Early in the reign of Alexius I Comnenus (ruled between 1081 and 1118), Myra was again overtaken by Islamic invaders, this time the Seljuk Turks. In the confusion, sailors from Bari in Italy seized the relics of Saint Nicholas, over the objections of the monks caring for them, and spirited the remains away to Bari, where they arrived on May 9, 1087, and soon brought that city visitors making pilgrimage to Saint Nicholas. 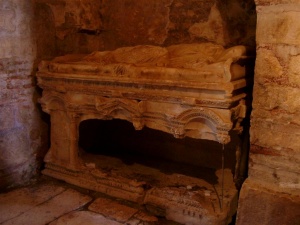 The original tomb of St. Nicholas at the basilica in Myra.

The earliest church of St. Nicholas at Myra was built in the 6th century. The present-day church was constructed mainly from the 8th century onward; a monastery was added in the second half of the 11th century.

In 1863, Tsar Alexander II of Russia purchased the building and began restoration, but the work was never finished. In 1963 the eastern and southern sides of the church were excavated. In 1968 the former confessio (tomb) of St. Nicholas was roofed over.

The floor of the church is made of opus sectile, a mosaic of coloured marble, and there are some remains of frescoes on the walls. An ancient Greek marble sarcophagus had been reused to bury the Saint; but his bones were stolen in 1087 by merchants from Bari, and are now held in the cathedral of that city.

The church is currently undergoing restoration. In 2007 the Turkish Ministry of Culture gave permission for the Divine Liturgy to be celebrated in the church for the first time in centuries. On 6 December 2011 Metropolitan Chrysostomos, who has the title of Myra, accordingly officiated.[6]