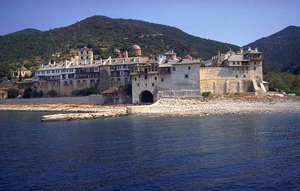 Within the monastery precincts there are eight chapels. Two of these are associated with the old katholikon where the chapels of St. Demetrios and St. Lazaros are within the katholikon. The other six, St. John the Theologian, St. Euphemia, Ss. Cosmos and Damian, the Dormition of of the Virgin, the Presentation of the Virgin, and St. Stephen, are outside it. There are also six chapels outside the precincts of the monastery. Additionally, the sketes of the Annunciation and Xenophontos belong to the monastery.