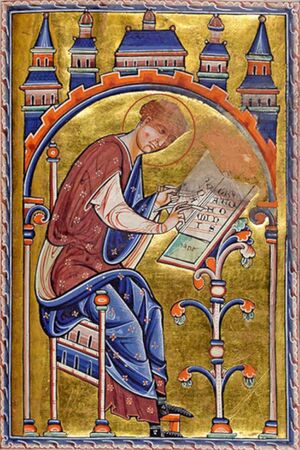 Our father among the saints Isidor de Sevilia, (lat. Isidorus Hispalensis), was the Archbishop of Seville in Hispania (Spain) during the early decades of the seventh century. With his archepiscopate of over three decades, he is seen as "the last scholar of the ancient world". His feast day is April 4.

Isidore was born about the year 560 in Cartagena, Hispania, today's Spain, into the family of Severianus and Theodora. The family, which included his brothers Leander and Fulgentius and sister Florentina, was related to the Visgoth royalty and was influential in the conversion of the Visigothic kings from Arianism to the Orthodox faith. Orphaned at an early age, Isidore received his elementary education under the guidance of his brother Archbishop Leander at the Cathedral School of Seville, whose teaching staff included many learned men including Abp. Leander. The extent of Abp. isidore's knowledge was extensive. His education included learning Latin, Hebrew, and Greek.

After the death of his brother Leander in 600, Isidore succeeded him to the see of Seville. While Isidore is not known to have have entered a monastic life, Isidore professed himself a protector of the monks. He pronounced anathema against any ecclesiastic who should abuse the monasteries in anyway.

The extended period of his episcopate was during a time of disintegration and transition as the ancient institutions and knowledge of the Roman Empire were disappearing. During these times Abp. Isidore set himself to the task of joining into a homogeneous nation the many peoples who made up the Gothic kingdom. To accomplish this task he used all the resources of religion and education available to him. He presided over the Second Council of Seville in November 619, leading to the setting forth of the nature of Christ in the Acts of the council, as he pushed for the eradication of Arianism.

While then advanced in years, Isidore presided over the Fourth Council of Toledo in December 633 which decreed that all bishops establish education facilities in their cathedral cities including seminaries similar to that in Seville.

A prolific writer, Isidore wrote on religious, historical, and scientific topics. His Etymologies (or Origins) was a compendium of the knowledge of his time and was used through the Middle Ages. Due to this, some Orthodox venerate him as the Patron Saint of the Internet, which can be viewed as a modern-day effort at a compendium of all knowledge, as do some Catholics, with the Pope's blessing. Today, however, his history of the Goths and Vandals is of greater interest. He even composed a monastic Rule, although he was not a monk. He also wrote biographies of biblical figures and other illustrious men.

A Prayer before Using the Internet

Make three bows, kiss the holy icons, and say:
Almighty and eternal God, who created us in Thy image and bade us to seek after all that is good, true and beautiful — especially in the divine person of Thy Only-begotten Son and our Lord, Jesus Christ — grant, we beseech Thee, that through the intercession of Saint Isidore, Bishop and Doctor, during our journeys through the internet we will direct our hands and eyes only to that which is pleasing to Thee and treat with charity and patience all those souls whom we encounter Through Christ our Lord. Amen.