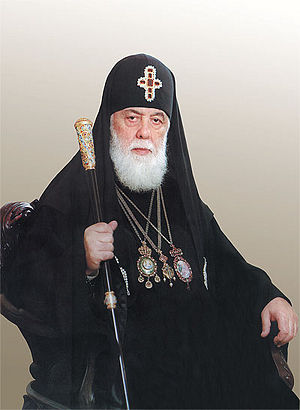 The future Catholicos-Patriarch was born Irakli Ghudushauri-Shiolashvili (Georgian: ირაკლი ღუდუშაური-შიოლაშვილი) on January 4, 1933 in Vladikavkaz, North Ossetia. He is a descendant of an influential eastern Georgian mountain clan that has family ties with the former royal dynasty of the Bagrationi.

After finishing his lower education, Irakli chose a theological career. He attended and graduated from the Moscow Theological Seminary. After having been tonsured a monk, with the name Ilia, he was ordained a hierodeacon in 1957 and then a hieromonk in 1959. He continued his theological education at the Moscow Theological Academy, graduating in 1960. After his graduation Fr. Ilia returned to Georgia where he was assigned as a priest to the Batumi Cathedral Church. In 1961, he was elevated to hegumen and later to archimandrite. On August 26, 1963, he was consecrated bishop of Batumi and Shemokmedi and was appointed a patriarchal vicar. In 1963, he was assigned as the first rector of the Mtskheta Theological Seminary, a position he held until 1972. The Mtskheta seminary was the only theological school in Georgia at that time.

In 1967, Arch. Ilia was elected bishop of Tskhumi and Abkhazeti, and in 1969, was awarded the title of metropolitan. After the deposition of the controversial Patriarch David V, he was elected the Catholico-Patriarch of Georgia on December 25, 1977. After becoming the first hierarch, Patr. Ilia began implementation of reforms that enabled the Church of Georgia to regain much of its former influence and prestige, attributes that it had before it was suppressed by the Soviet Union. By 1988, the number of priests in the Church of Georgia grew to 180, with a monastic community of 40 monks, and 15 nuns. The community of faithful was variously estimated as being between one and three million. There also were 200 churches, a seminary, and seven monasteries (three female and four male). During the 1980s, Patr. Ilia actively engaged himself in the social life of Georgia. He participated on April 9, 1989 with the Georgian people in demonstrations in Tbilisi against the Soviet rule. As these demonstrations became heated, Patr. Ilia unsuccessfully urged the protesters to withdraw to the nearby Kashueti Church to avoid the bloodshed. This peaceful demonstration, however, was dispersed by the Soviet troops, who left behind 22 dead and hundreds injured. In the early 1990s as the Soviet Union was falling apart, he called on the rival political parties within Georgia to find a peaceful solution to the internal crisis during the civil war that broke out in Georgia.

As patriarch, he received high Church honors from the Patriarchs of the Churches of Antioch, Jerusalem, Alexandria, Russia, Greece, Bulgaria, Romania, and other Orthodox Churches.

Patr. Ilia II is an Honorary Academician of the Georgian Academy of Sciences (in 2003) and of the International Academy for the Promotion of Scientific Research (in 2007).

He has been a proponent of a constitutional monarchy as the form of government for Georgia. In his sermon on October 7 2007, he publicly called for consideration of establishing a constitutional monarchy under the Bagrationi dynasty, a dynasty that the Russian Empire had dispossessed of the Georgian crown early in the nineteenth century.[1] The statement coincided with a rising confrontation between the government of Georgian President Mikheil Saakashvili and the opposition that included many members who welcomed the patriarch's proposal.[2]

During the Russian-Georgian war of August 2008, Patr. Ilia II appealed to the Russian political leadership and Church, expressing concerns that “the Orthodox Russians were bombing Orthodox Georgians," and dismissed the Russian accusations of Georgia’s “genocide” in South Ossetia as “pure lie”. He also made a pastoral visit to the Russian-occupied central Georgian city of Gori and the surrounding villages, bringing food and aid, to an area on the verge of humanitarian catastrophe. He also helped retrieve bodies of deceased Georgian soldiers and civilians.[3][4] Pat. Ilia II also blessed the September 1, 2008 “Stop Russia” demonstrations in which tens of thousands organized human chains across Georgia.[5]

In December 2008, Patr. Ilia II visited Moscow to pay a final farewell to Russia’s late Patriarch Alexei II. On December 9, 2008, he met Russia’s President Dmitri Medvedev, which was the first high-level official contact between the two countries since the August war.[6] Later, Patr. Ilia II announced that he had some “positive agreements” with Medvedev that needed “careful and diplomatic” follow-up by the politicians.[7]

In 2007, Patr. Ilia II spurred a baby boom in the nation by opting to personally baptize any third child born after his initiative started. The result was a national baby boom because being baptized by the Patriarch is a huge honor in Georgia.[8]