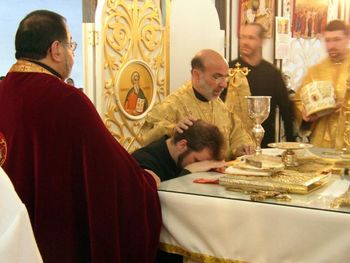 The ordination of a deacon.

Format:Spirituality Ordination is the sacrament (or Holy Mystery) of holy orders. The Greek words used for ordination are cheirotonia and cheirothesia, both of which mean "the laying on of hands." Members of the major orders of the clergy—bishop, priest, and deacon—are ordained during the Divine Liturgy by the bishop, who is usually assisted by several priests. According to Orthodox teaching, the process of ordination begins with the local congregation; but the bishop alone, who acts in the name of the universal Church, can complete the action.

Those who are placed into the minor orders (subdeacon, reader, and in some traditions, cantor) are done so by cheirothesia, which also means "laying on of hands," but has come to be a technically distinct term from cheirotonia, which is used only for the major orders. According to the DEC, cheirothesia is not regarded as part of the Holy Mystery of ordination (p. 117).

Cheirotonia and cheirothesia formerly were used almost interchangeably, but came to acquire distinct meanings. Bishops are also referred to as being "consecrated" rather than "ordained," but such a distinction was not present in the early Church (ODCC, p. 1189)

On the day of the tonsuring, following the Great Doxology, but before the troparion before the Divine Liturgy, the candidate is led by the bishop's assistant to the center of the solea in front of the bishop. He makes three (3) prostrations toward the holy altar. Then, he turns and makes one (1) prostration toward the bishop and stops on his knees. The Bishop lays his hand on the candidate head.

Subdeacons are ordained during the Divine Liturgy immediately before "Blessed is the Kingdom", once the Great Censing has been completed. According to the canons, no one should marry after becoming a subdeacon, but the practice has almost universally changed to allow subdeacons to marry after being made subdeacons.

During the service of ordination to the priesthood, a priest leads the candidate, who then kneels and rests his head on the altar. The bishop puts his stole and right hand over the candidate's head as the candidate receives the Holy Spirit. The entire congregation witnesses the ordination and proclaims the work of the Holy Spirit by shouting in unison "Axios!" (Greek word meaning 'worthy'). The bishop bestows sacred vestments on the new priest, who receives communion and recites a special prayer. Through ordination, men who have been chosen from within the Church are set apart by the Church for special service to the Church. Much of the time, a candidate for ordination will pursue preparatory studies at a seminary.

Candidates for the episcopacy are consecrated by three bishops (or at the very least two) to be bishops. A bishop's non-liturgical vestments include the kamilavka and epanokameloukion (veil) (which are joined together as the klobuk in the Russian tradition), along with the mantiya, all of which are monastic garments.