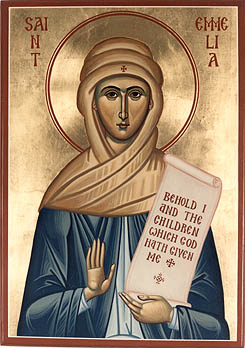 The holy and righteous Emily (also Emmelia or Emilia), is the mother of Saint Basil the Great and several other children who are saints of the Church. Churches of the Russian tradition keep her feast on January 1, along with her son Basil. Greek churches keep her feast on May 30 or May 8, along with her husband Saint Basil the Elder and her mother-in-law, Saint Macrina the Elder.