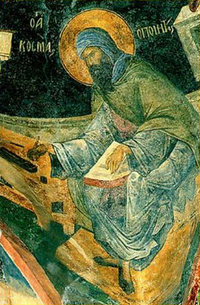 Sf. Cosma Imnograful
Sfântul Cosma Imnograful, episcopul Maiumei (cca 787) was a hymn-writer of the Eastern Orthodox Church and the foster-brother of Ioan Damaschin. The teacher of the two boys was an elderly Sicilian, also named Cosmas, who had been freed from slavery by St. John's father. St. John and Cosmas went from Damascus to Jerusalem, where both became monks in the monastery of St. Sabas near that city.

Cosmas, however, left the monastery in 743, when he was appointed Bishop of Maiuma, the port of ancient Gaza on the southern coast of Phoenicia. The Church observes his feast on October 12. As a learned prose-author Cosmas wrote comments on the poems of Grigorie Teologul; as a poet he is regarded by the Orthodox Church with great admiration. It considers Cosmas and St. John of Damascus the best representatives of the later Greek classical hymnology, the most characteristic examples of which are the artistic liturgical chants known as canons.

The hymns of Cosmas were originally intended to add to the interest of the services at Jerusalem, but through the influence of Constantinople their use became universal in the Greek Orthodox Church. It is not certain, however, that all the hymns ascribed to Cosmas in the Greek liturgical books were really his compositions, especially as his teacher of the same name was also a hymn writer.

Collections of hymns, varying in number, are attributed to Cosmas, and may be found in Migne, Christ-Paranikas, Anthologia graeca carminum christianorum.