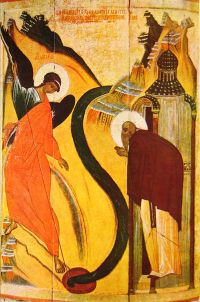 In 396 BC, during the Persian Wars, the satrap Tissaphernes was lured to Colossae and slain by an agent of the party of Cyrus the Younger. Pliniu cel Batrân tells that the wool of Colossae gave its name (colossinus) to the colour of the cyclamen flower. During the Hellenistic period, the town was of some mercantile importance, although by the 1st century it had dwindled greatly in size and significance.

It does not appear his Epistle to the Colossians that Apostolul Pavel had visited this city, for it only speaks of him having heard of their faith (Col. 1:4) and since he tells Apostolul Filimon of his hope to visit it upon being freed from prison (see Philemon 1:22). To judge from the Letter to the Colossians, Epaphras was a person of some importance in the Christian community there (Col. 1:7; Col. 4:12), and tradition presents him as its first bishop. Tradition also gives Philemon as the second bishop of the see. The first historically documented bishop is Epiphanius, who was not personally at the Council of Chalcedon, but whose metropolitan bishop Nunechius of Laodicea, the capital of the Roman province of Phrygia Pacatiana signed the acts on his behalf.

In Imperiul bizantin times, Colossae fell into decay (possibly due to an earthquake) and the town of Chonae arose near its ruins. The first recorded bishop of Chonae was Cosmas, who signed the acts of the Sinodul Quinisext of 692 as bishop of "Colossae or Chonae". A successor of his, named Theodosius or Dositheus, was mentioned as participating in the Sinodul VII Ecumenic in 787 as bishop of "Chonae or Colossae". In about 858-860 the bishopric was elevated to the rank of autocephalous archdiocese and later to that of metropolitan see, but without suffragans. It is no longer mentioned in documents later than the end of the 14th century.[3][4][5] No longer a residential bishopric, Colossae is today listed by the Catholic Church as a titular see.[6] 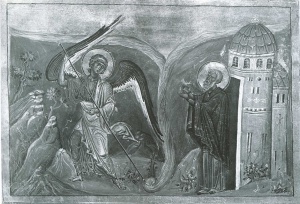 In Byzantine and Russian art, the theme of the Miracle of the Archangel Michael at Chonae (Τὸ ἐν Χωναῖς/Χῶναις Θαῦμα τοῦ Ἀρχαγγέλου Μιχαήλ) is intimately linked with the site. Eastern Orthodox tradition tells that the pagans directed the stream of a river against the sanctuary of St. Michael there to destroy it, but Mihail (Arhanghelul) appeared and split the rock by lightning to give a new bed to the stream, diverting the flow away from the church and sanctifying forever the waters which came from the gorge. The Orthodox celebrate a feast in commemoration of this event on 6 September. The Monastery of the Miracle (Chudov Monastery) in the Moscow Kremlin, where the Russian Tsars were baptized, was dedicated to the Feast of the Miracle at Kona.

The 5th- to 7th-century texts that refer to the miracle at Chonae formed the basis of specific paradigms for "properly approaching" angelic intermediaries for more effective prayers within the Christian culture.[7]