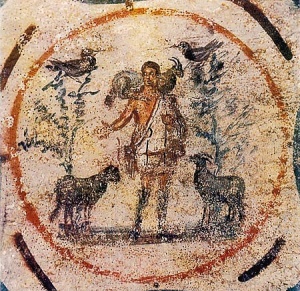 Hristos Bunul Păstor: pictură murală pe zidul unei catacombe din Rome. Christ the Good Shepherd was one of the themes favoured by the martyrs of the catacombs during the first two centuries AD.
Catacomba (gr. "κατά κυμβής (katá kymbḗs)" sau "κατά κύμβας (katá kýmbas)", meaning "near the low place or ravine") was originally the name of a particular district in Rome, but later referred to subterranean Christian burial places throughout the Roman Empire. Catacombs have been discovered in Anatolia, Malta, and North Africa, and in the cities of Naples, Paris, Syracuse, Trier in Germany, and Alexandria, Egypt. However, the principal catacombs are those in Rome (about 40 in number). Found mainly along the Via Appia, the Via Ostiensis, the Via Labicana, the Via Tiburtina, and the Via Nomentana, they bear 4th-century names identifying the martyrs who were buried in them.

The construction of catacombs began in the 2nd century. They were initially used for refuge during times of persecution, for the celebration of the Eucharist, for interment of the dead, and for memorial services. By the 5th century, they were no longer used for burial, but exclusively for religious services commemorating the death of a martyr. By the 9th century, catacombs completely fell into disuse and were forgotten until their rediscovery in 1578. 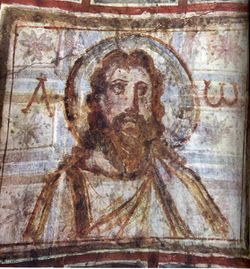 Hristos, sec. al IV-lea, în catacomba lui Commodilla. This mural painting is an early image of a bearded Christ. Earlier Christian art in Rome portrayed Jesus usually as the Good Shepherd, disguised as Orpheus, young, beardless, and in a short tunic. During the 4th century depictions of Jesus began that showed him as a man of identifiably Jewish appearance, with a full beard and long hair, a style not usually worn by Romans.

The inscriptions, symbols, and paintings on the walls, arches, and sarcophagi in the catacombs provide a rich source of information about Early Christian art and prayer, and include Christ depicted as the Good Shepherd and Noul Testament miracles. Small lamps used for lighting the passages and burial sites in the catacombs were decorated with Christian symbols such as the cruce, the dove, the Chi-Rho symbol [1], the fish, and loaves. Prayers for the departed, for the newly baptized, and for courage and perseverance under trial appear frequently.

After 313 AD, when Roman persecution of Christians ended with the establishment of Christianity as an official religion, the practice of subterranean burial gradually declined in favour of using above ground cemeteries in and around church buildings, and many of the relics of martyrs were transferred to churches and basilicas.