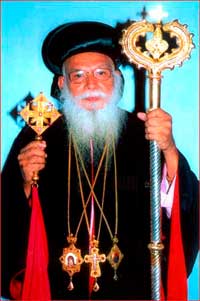 Against the background of trade between India and West Asia since ancient times, travel close to the coast of Arabia was feasible and not uncommon, reaching Malabar, the Tamil country, Sidh (Scythia) and western India (Kalyan), around the time St. Thomas came to India.

There is a wealth of corroborative evidence to support, and no good reason to doubt the living tradition of Thomas Christians that the Apostle arrived in Kodungalloor (Muziris) in Kerala in 52 AD preached the Gospel, established seven churches, and moved on to other kingdom, returning to Madras (Mylapore) in 72 AD where he was martyred that year. Writers of the 4th century, St. Ephraim and St. John Chrysostom knew also about the relics of St. Thomas resting at that time in Edessa, having been brought there from India by West Asian merchants.

The Church founded by St. Thomas must have been rather spread out in the subcontinent including the North-West, the Western and Eastern coasts of the peninsula, probably also reaching Sri Lanka. Tradition associates the ministry of St. Thomas with the Indo-Parthian king, Gondophares in the north and with King Vasudeva (Mazdeo) of the Kushan dynasty in the South. It was the latter who condemned the Apostle to death.

The Orthodox Church in India is one of the 37 Apostolic Churches, dating from the time of the disciples of Christ. Nine of these were in Europe and 28 in Asia and Africa. Today, it belongs to the family of the five Oriental Orthodox Churches, which include Syria, Egypt, Ethiopia, and Armenia, and to the wider stream of the world's Orthodox churches, comprising in all over 150 million Eastern Christians. It has a strength of over 2 million members in about 1500 parishes mainly in Kerala and increasingly spread all over India and in many parts of the globe. Eastern in original and Asian in its moorings, the Indian Church is, a distinctive and respected part of the rich religious mosaic that is India.

Until the 16th century, there was only one Church in India, concentrated mainly in the south-west. The seven original churches were located at Malankara (Malayattur), Palayur (near Chavakkad), Koovakaayal (near North Paravur), Kokkamangalam (South Pallippuram), Kollam, Niranam and Nilackel (Chayal). Of the same pattern adopted by the other Apostles, each local church was administered, guided by a group of Presbyters and presided over by the elder priest or bishop.

The Indian Church was autonomous then, and is now, like all Orthodox Churches. This is clear from the fact that no name of any church in India is seen in the now available list of bishoprics of the church in Persia from the fifth to the seventh century.

The Early Church in India remained one and at peace, treasuring the same ethnic and cultural characteristics as the rest of the local community. Its members enjoyed the goodwill of the other religious communities as well as the political support of the Hindu rulers. The Thomas Christians welcomed missionaries and migrants from other churches, some of whom sought to escape persecution in their own countries. The language of worship in the early centuries must have been the local language probably a form of Tamil. In later centuries, the liturgical language mingled with East Syriac received through the churches of Seleucia and Tigris.

The Persian connection of the Indian churches has to bee seen in the context of the internal dissensions and state persecution of Christians in Persia from the 5th century. A Synod of the Persian Church (410 AD) affirmed the faith of Nicea and acknowledged the Metropolitan of Selucia-Ctesiphon as the Catholicose of East. Not long after, the Christological controversies of Chalcedon, fuelled by the strains between the Persian and Byzantine empires, swayed the Persian church to declare itself "Nestorian" and its head to assume the title of Patriarch of the East (Babylon). From their base in then flourishing theological school of Nisibis, Nestorian missionaries began moving to India, Central Asia, China and Ethiopia to teach their doctrines- probably associating the churches in these countries with the work of St. Thomas the Apostle, whom the Persians must have venerated as the founder of their own church.

There were other developments in the Persian Church of potential import to the Indian Church. A renaissance of the pre-Chalcedon faith began led by Jacob Baradeus, emphasizing the West Syrian Christological tradition of the one united nature, influencing the church in Persia as well. Availing the relatively equallable political climate following the Arab conquest of Syria and other parts of West Asia, a maphrianate of the anti-Chalcedonians was established and Mar Marutha, a native Persian, became the first Jacobite Maphriyono (Catholicose) of the East. The jurisdiction of this Catholicose at Tigris extended to 18 Episcopal Dioceses in lower Mesopotamia and further east, but significantly, not to India.

On the lift (growth) of the church in India during the first 15 centuries, the balance of historical evidence and the thrust of local tradition point to its basic autonomy sustained by the core of its own faith and culture. It received with the trust and courtesy missionaries, bishops and migrants as they came from whichever eastern Church- Tigris or Babylon, Antioch or Alexandria, but not from the more distant Constantinople or Rome. There were times in this long period when the Christians in India had been without a bishop and were led by an Archdeacon. And requests were sent, sometimes with success, to one another of the Eastern prelates to help restore the episcopate in India. Meanwhile the church in Persia and much of west declined by internal causes and the impact of Islam, affecting both the "Nestorian" Patriarchate of the East (Babylon) and the Jacobite Catholicate of the East (Tigris). As will be seen from the later history of the Indian Church, the latter, was reestablished in India (Kottayam) in 1912 while the former was transplanted to America 1940. 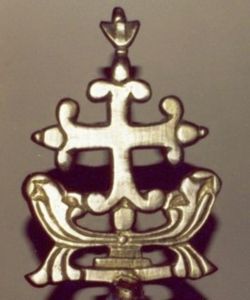 The post-Portuguese story of the church in India from the 16th century- is relatively well documented. In their combined zeal to colonize and proselytize, the Portuguese might not have readily grasped the way of life of the Thomas Christians who seemed to accommodate differing strands of eastern Christian thought and influence, while preserving the core of their original faith. The response of the visitors was to try and bring them under Rome-Syrian prelates, apart from the new converts in the coastal areas under Latin prelates.

Pushed beyond a limit, the main body of Thomas Christians rose in revolt and took a collective oath at the Koonen Cross in Mattancherry in 1653, resolving to preserve the faith and autonomy of their church and to elects its head. Accordingly, Archdeacon Thomas was raised to the title of Mar Thoma, the first in the long line up to Mar Thoma IX-till 1816.

At the request of the Thomas Christians, the "Jacobite" bishop, Mar Gregorios of Jerusalem came to India in 1664, confirmed the Episcopal consecration of Mar Thoma I as the head of the Orthodox Church in India. Thus began the formal relationship with the "Jacobite" Syrian Church, as it happened, in explicit support of the traditional autonomy of the Indian Church.

History repeated itself in another form when the British in India encouraged 'reformation within the Orthodox Church' Partly through Anglican domination of the theological seminary in Kottayam, besides attracting members of the church into Anglican congregations since 1836. Finally the reformist group broke away to form the Mar Thoma Church. This crisis situation was continued with the help of Patriarch Peter III of Antioch who visited India in 1875-77. The outcome was twofold; a reaffirmation of the distinctive identity of the Orthodox Church under its own Metropolitan and, at some dissonance with this renewal, an enlarged influence of the Patriarch of Antioch in the affairs of the Indian Church.

Thus the relationship which started for safeguarding the integrity and independence of the Orthodox Church, in India, against the misguided, if understandable, ambitions of the Roman Catholic and Anglican Protestant Churches, opened a long and tortuous chapter in which concord and conflict between the Indian and Syrian Orthodox Churches have continued to alternate, to this day.

Three landmarks of recent history, however, lend hope that peace and unity might yet return to the Orthodox Community, driven rather unnaturally by divided loyalty. First, the relocation in India in 1912 of the Catholicate of the East originally in Selecuia and later in Tigris and the consecration of the first Indian Catholicose-Moran Mar Baselios Paulos- in Apostolic succession to St. Thomas, with the personal participation of Patriarch Abdul Messiah of Antioch, second, the coming into force in 1934 of the Constitution of the Orthodox Church in India as an autocephalous Church linked to the Orthodox Syrian Church of the Patriarch of Antioch, and third the accord of 1958, by which Patriarch Ignatius Yakoub III affirmed his acceptance of the Catholicose as well as the Constitution.

The fact that the Christian Church, first appeared in India, as elsewhere, as a fellowship of self-governing communities to the same body and born into the same new life, may yet light the path to a future of peace, within and beyond the Orthodox Community.