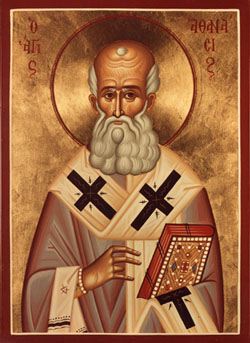 Our father among the saints Atanasie al Alexandriei (from Greek, "immortal") was a bishop of Alexandria and major theological writer in the fourth century. He is also called Athanasius the Great and (by the Coptic church) Athanasius the Apostolic. He was born in 298 and died on May 2, 373. His feast day in the Orthodox Church is January 18.

He was born to pagan parents. When he was in school he saw a group of Christians acting out services and when he asked to join them, they refused. From then on he declared himself Christian. The patriarch at that time, Pope Alexander, predicted that he would eventually hold a great position.

Before reaching the age of 20, Athanasius wrote a treatise entitled On the Incarnation, affirming and explaining that Jesus Christ was both God and Man. In about 319, when Athanasius was a deacon, a presbyter named Arius began teaching that there was a time before God the Father begat Jesus when the latter did not exist. Athanasius responded that the Father's begetting of the Son, or uttering of the Word, was an eternal relationship between them, not an event that took place within time. Thus began catholic Christianity's fight against the heresy of Arianism.

Athanasius fought consistently against Arianism all his life. As a deacon, he accompanied Alexander of Alexandria to the First Council of Nicea in 325, which produced the Nicene Creed and anathematized Arius and his followers. The Coptic church maintains a tradition that Athanasius was the main author of the Nicene Creed, and has therefore given him the title of Defender of the Faith.

On May 9, 328, he succeeded Alexander as bishop of Alexandria, becoming the 20th Patriarch of the Church of Alexandria, a position which he held for 45 years, 16 of which he spent in exile. As a result of rises and falls in Arianism's influence, he was banished from Alexandria only to be later restored on at least five separate occasions, perhaps as many as seven. This gave rise to the expression Athanasius contra mundum or "Athanasius against the world." During some of his exiles, he spent time with the Desert Fathers, monks and hermits who lived in remote areas of Egypt.

Athanasius is also the first person to identify the same 27 books of the New Testament that are in use today; up until his Easter letter, various similar lists were in use. However, his list was the one that was eventually ratified by a series of synods and came to be universally recognized as the New Testament canon.

He also wrote a biography of Anthony the Great that later served as an inspiration to Christian monastics in both the East and the West. The Athanasian Creed is traditionally ascribed to him, though it is likely not his work. 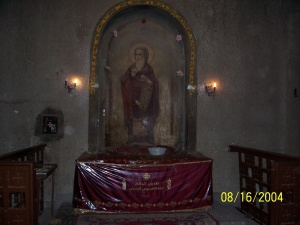 St. Athanasius Shrine (where the saint's relics are preserved) under St. Mark's Cathedral, Cairo
The saint was originally buried in Alexandria. His holy body was later transferred to Italy. Pope Shenouda III restored the relics of St. Athanasius to Egypt on 15 May 1973,[1] after his historical visit to the Vatican and meeting with Pope Paul VI. The relics of St. Athanasius the Great of Alexandria are currently preserved under the new St. Mark Coptic Orthodox Cathedral in Deir El-Anba Rowais, Abbassiya, Cairo, Egypt.

The following is a troparion (hymn) to St. Athanasius sung in some Orthodox churches:

O holy father Athanasius,
like a pillar of orthodoxy
you refuted the heretical nonsense of Arius
by insisting that the Father and the Son are equal in essence.
O venerable father, beg Christ our God to save our souls.