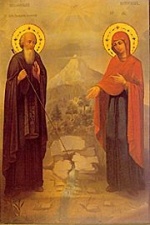 Born Abraham in Trebizond about the year 920, he was orphaned at an early age and was raised by a pious nun. After the death of his adoptive mother, Abraham was taken to Constantinople, to the court of the emperor Romanus the Elder. There, he was enrolled as a student under the renowned rhetorician Athanasius. Soon, he attained the mastery of skill of his teacher, and he himself became an instructor of youths. During his time in Constantinople, Abraham met St. Michael Maleinus, egumen of Kyminas Monastery. Abraham told St. Michael about his life and revealed to him his desire to become a monk. Michael recognizing in Abraham the Holy Spirit taught him much in questions of salvation. During their spiritual talks Michael was visited by his nephew, Nichifor Foca, a military officer who was to be a future emperor. Nicephorus became impressed with Abraham's spirit, and for all his life Nikephoros regarded Abraham with reverent respect and love.

Consumed with zeal for the monastic life, Abraham left everything behind and went to the Kyminas Monastery. There, he fell down at the feet of Igumen Michael and begged to be received into the monastic life. Fulfilling Abraham's request with joy, the igumen tuns him with the name Athanasius. Later in 958, having left Kyminas in search of a solitary place, Athanasius came to a place called Melanos, at the very extremity of Mount Athos, where he settled far from the other monastic dwellings. Here, he struggled, intending to leave after a year, when on the last day as he set to pray, a heavenly light suddenly shined upon him, filling him with an indescribable joy. All the thoughts of leaving dissipated and his eyes welled up, graced with tears. From that moment St. Athanasius received the gift of tenderness, and he became as strongly fond of the place of his solitude as he had formerly loathed it.

During this time Nicephorus Phocas, remembering his vow to become a monk, besought Athanasius to build a monastery. At first reluctant, Athanasius set about the building of the monastery. While having to defend the hermits and sketes from raids by the Muslim Saracens, and incorporating already established sketes in his community, he built what would eventually become known as the Great Lavra. This monastery was dedicated in 963. The monastery is still in use today and is often referred to by people of the area simply as "Lavra", or "The Monastery". Three other monasteries were also founded during the lifetime of Athanasius, those of Iviron, Esphigmenou, and Vatopedi.

Athanasius established at the monastery a cenobitic monastic Rule on the model of the old Palestinian monasteries. Divine services were served with all strictness, and no one was so bold as to talk during the services, nor to come late or leave the church without necessity. Yet, Athanasius met with considerable opposition from the hermits already at Mount Athos during the construction of his monasteries. They resented his intrusion and attempts to bring order and discipline to their lives.

Upon the death of emperor Nicephorus in 969, the enemies of Athanasius prevailed, and he was forced to leave Athos for Cyprus. There he lived until the new emperor, John Tzimisces, resumed patronage of the Great Lavra and bestowed upon the monastery its first charter in 971.

Athanasius died about the year 1000, during an accident. He was killed by falling masonry when the cupola of new construction on his church collapsed. After his death, Athanasius was glorified as a saint.