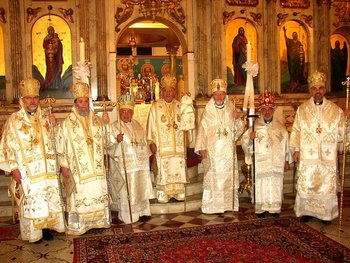 History of the Archdiocese 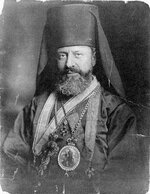 The first Orthodox bishop consecrated in North America, St. Raphael Hawaweeny, was consecrated by the Russian Orthodox Church in America to care for the Orthodox Arab faithful in the USA and Canada. The Antiochian Archdiocese in North America traces its genesis to his ministry. His initial arrival in America was not to serve in the episcopacy, however, but he came as an archimandrite in 1895 at the request of members of the Syrian Orthodox Benevolent Society, an ostensibly philanthropic group whose primary purpose was to maintain ties between Orthodox Arabs living in America. He thus came to the US and was canonically received under the omophorion of Bishop Nicholas (Ziorov) of the Aleutians, the Church of Russia's exarch in America at the time.

Upon arriving in New York, Fr. Raphael established a parish in lower Manhattan, then the center of the Syrian immigrant community. By 1900, however some 3,000 of these immigrants had moved across the East River, shifting the center of their life to Brooklyn. Thus, in 1902, the parish purchased a larger church building in that borough on Pacific Street. The church was named for St. Nicholas the Wonderworker, renovated for Orthodox worship, and then consecrated on October 27, 1902, by St. Tikhon of Moscow. St. Nicholas Cathedral was later relocated to State Street in Brooklyn and is today considered the mother cathedral of the Archdiocese.

At the request of St. Tikhon, Fr. Raphael was chosen as his auxiliary bishop, consecrated at St. Nicholas Cathedral as Bishop of Brooklyn and given more authority for his care of Arabic Orthodox Christians in America. Not long after, he founded Al-Kalimat (The Word) magazine, published service books in Arabic which were used in America, the Middle East, and throughout the Arabic Orthodox diaspora. St. Raphael fell asleep in the Lord at the age of 54 on February 27, 1915, after short, but fruitful, years of service. 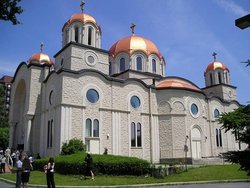 However, after the Bolshevik Revolution threw the Russian Orthodox Church and its faithful abroad into chaos, the Orthodox Arab faithful in North America, simultaneously shaken by the death of their beloved bishop St. Raphael, chose to come under the direct care of the Patriarchate of Antioch. Due to internal conflicts, however, the Antiochian Orthodox faithful in North America were divided between two archdioceses, those of New York and Toledo, generally representing those who were loyal to the Church of Antioch and the Church of Russia, respectively. This division of the Arabic faithful resulted significantly from the division in loyalty to the bishops who aligned themselves at the time with the Russian Metropolia, those who were involved with the formation of the now-defunct American Orthodox Catholic Church, and those who chose to have canonical recourse directly to the Holy Synod of Antioch. Format:Orthodoxyinamerica With the signing of the Articles of Reunification by Metropolitan Philip (Saliba) and Metropolitan Michael (Shaheen) in 1975, the two Antiochian Orthodox archdioceses were united as one Archdiocese of North America (now with its headquarters in Englewood, New Jersey). Metropolitan Philip became the primate of the newly reunified archdiocese, and Metropolitan Michael became an auxiliary archbishop. Since then the Archdiocese has experienced rapid and significant growth through the conversion of a number of Evangelical Protestants—both individually and as congregations, especially with the reception of the majority of the Evangelical Orthodox Church in the 1980s—and also through ongoing evangelization and the immigration of Orthodox Arabs from the Middle East.

Its current primate is Metropolitan Philip (Saliba), who has six other diocesan bishops assisting him in caring for the nine dioceses of the growing Archdiocese, which is the third largest Orthodox Christian jurisdiction in North America, having 236 communities (38 of which are missions). Estimates of the number of faithful range from 51,320 to 84,000[1] to 380,000[2] depending on the report and the counting method being used. The number of new Antiochian parishes in the decade between 1990 and 2000 rose by approximately 33%, and the primary membership growth in the Archdiocese has been from American converts.[3] From 2003 to 2005, an increase of 1,229 communicants was reported at the conventions, an increase of 2.5%. 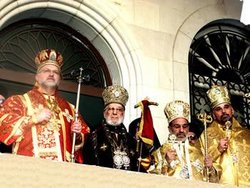 On October 9, 2003, the Holy Synod of the Church of Antioch granted the Archdiocese's request to be granted self-rule (as distinct from autonomy, and though the words have the same literal meaning in English, they are distinct in Arabic) to allow it to better govern itself, improve and increase its outreach efforts, internally organize itself into several dioceses, and continue progress toward Orthodox administrative unity in the Americas. Three new bishops were consecrated in December of 2004 to assist in the governance of the reorganized Archdiocese.

The Archdiocese also includes one monastic community, St. Paul Skete (Grand Junction, Tennessee), a community for women. It does not run any of its own seminaries, but sends its seminarians to theological schools run by other jurisdictions or overseas. The Archdiocese does run various non-seminary educational programs, however, including the St. Stephen's Course in Orthodox Theology.

The Antiochian Archdiocese is also a member of SCOBA and was formerly a member of the National Council of Churches (NCC), but on July 28, 2005, its Archdiocesan Convention voted unanimously to withdraw fully from that organization, thus making it the first of the major Orthodox jurisdictions in the US to do so.

Additionally, the 2005 convention voted another first for a major American Orthodox jurisdiction: to alter the assessment-based model of archdiocesan revenue to a tithe (10%) of each parish's income (excepting building funds), to be phased in at 8% in 2007 and then followed by 1% increases in 2008 and 2009, respectively. Of the Archdiocese's 236 communities, 31 are already tithing.

According to the November 2007 issue of the Word magazine (p. 5)[4], the following membership figures were reported at the 2007 Archdiocesan Convention: